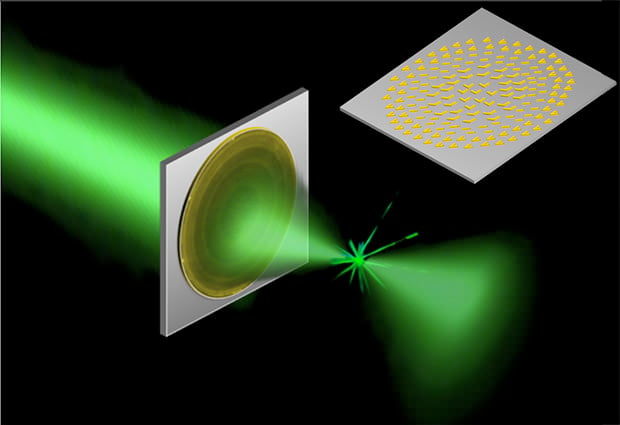 Think pancake lenses are flat? In the future, camera manufacturers might be able to replace those bulky glass elements inside lenses with lens elements that are thinner than a piece of paper. The lenses would not only be third-dimension-free, they would also be distortion-free.


Scientists — more specifically, physicists — at Harvard have succeeded in creating an ultra-thin, flat lens that only measures 60 nanometers in thickness.

In case you’re not familiar with the nanometer: there are 10 million nanometers in 1 centimeter. There are 100,000 nanometers in a sheet a paper (roughly the same thickness of a human hair). Fingernails grow at roughly one nanometer per second.

So basically, the thickness of this crazy new lens is the length your nails grow in one minute. That’s pretty darn thin.

Creating the lens involves covering a thin wafer of silicon with nanometer-thin “gold antennas” — V-shaped structures that capture light, store it very briefly, and then release it in a new direction. By tuning the output directions of these antennas, scientists made the uber-thin sheet redirect light just like a thick glass lens would.

The advantage of the new lens, besides the obvious one of being essentially two dimensional, is that they can focus incoming light without any of the distortions of conventional lenses:

The flat lens eliminates optical aberrations such as the “fish-eye” effect that results from conventional wide-angle lenses. Astigmatism and coma aberrations also do not occur with the flat lens, so the resulting image or signal is completely accurate and does not require any complex corrective techniques.

Lead scientist Francesco Aieta says that the technology may one day “replace all the bulk components in the majority of optical systems with just flat surfaces.”