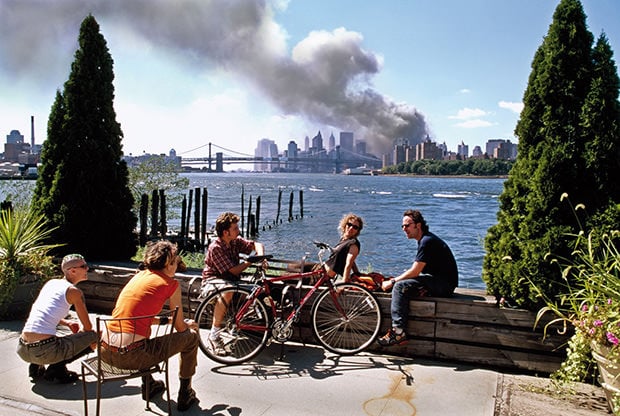 During the 9/11 attacks in NYC, Magnum photographer Thomas Hoepker shot what is perhaps the most controversial image created that day: a photo that appears to show a group of young people casually enjoying themselves while the World Trade Center burns in the background. Hoepker kept the image under wraps for four years and then caused quite a stir after publishing it in a 2006 book. Columnist Frank Rich wrote in the New York Times that “The young people in Mr. Hoepker’s photo aren’t necessarily callous. They’re just American.”


Three days after Rich’s column in the NYT, The Slate published an email from Walter Sipser, a Brooklyn artist and the man on the right hand side of the photo. Sipser had harsh words for both Hoepker and Rich:

We were in a profound state of shock and disbelief, like everyone else we encountered that day. Thomas Hoepker did not ask permission to photograph us nor did he make any attempt to ascertain our state of mind before concluding five years later that, “It’s possible they lost people and cared, but they were not stirred by it.” Had Hoepker walked fifty feet over to introduce himself he would have discovered a bunch of New Yorkers in the middle of an animated discussion about what had just happened. He instead chose to publish the photograph that allowed him to draw the conclusions he wished to draw, conclusions that also led Frank Rich to write, “The young people in Mr. Hoepker’s photo aren’t necessarily callous. They’re just American.” A more honest conclusion might start by acknowledging just how easily a photograph can be manipulated, especially in the advancement of one’s own biases or in the service of one’s own career.

Photographer Colin Pantall has written up a great post on this issue and how we look at images with expectations:

The idea is that one should look a certain way in the face of tragedy, part of the simplistic narrative that is expected of people when they are part of a photograph – a simplistic narrative that does not have an equivalence in writing. Here it is easy to explain the contrast between the glorious sky and the casual dress, the trappings of the picnic and the relaxed poses. These are all allowed to happen, but when it comes to a photograph, God forbid if anybody is caught doing anything that lies outside a very narrow band of expected responses.