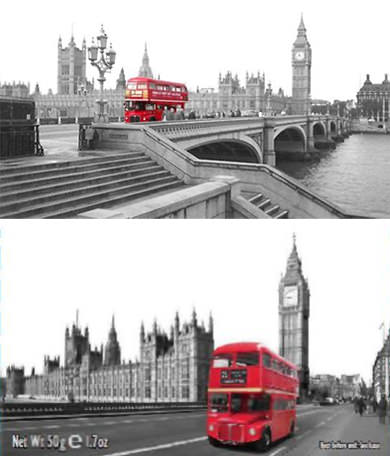 If you’re a photographer in the UK, you might want to think twice about shooting and selling a photograph that has a similar composition to an existing photo. Souvenir company Temple Island Collection has won a copyright infringement case against tea company New English Teas after a photo of a red London bus was used on tea packaging. Photo copyright expert and lawyer Charles Swan states,

His honour Judge Birss QC decided that a photograph of a red London bus against a black and white background of Big Ben and the Houses of Parliament, with a blank sky, was similar enough to another photograph of the same subject matter to infringe copyright.

The decision is perhaps surprising, given the commonplace subject matter of the photographs. The judge himself admitted that he found it a difficult question, but in the end he decided that a substantial part of photograph one [Temple Island’s image, top] had been reproduced in photograph two [New English Teas’, bottom].

Although the photo itself wasn’t copied, the judge ruled that the similarity of the ‘visual contrast’ of the red bus and B&W background infringed on the original photographer’s ‘intellectual creation’. The case is reminiscent of photographer David LaChapelle’s lawsuit against Rihanna for infringing upon his style in one of her music videos. Rihanna ended up paying an undisclosed sum of money to LaChapelle to settle the case.