Here’s a mind-bending video in which someone created the famous checker shadow illusion in real life. The optical illusion takes advantage of the way our brains process lighting and shadows.

As with many so-called illusions, this effect really demonstrates the success rather than the failure of the visual system. The visual system is not very good at being a physical light meter, but that is not its purpose. The important task is to break the image information down into meaningful components, and thereby perceive the nature of the objects in view. [#]

Here’s the same optical illusion as a graphic: 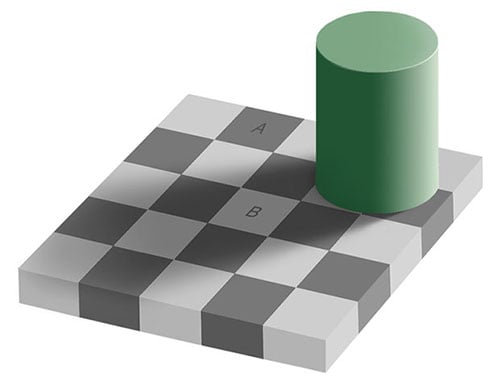 The squares labeled A and B are exactly the same color (use the color-dropper tool in Photoshop if you don’t believe it).

(via Gizmodo via Strobist)

Google and Microsoft Named as Possible Suitors for Kodak