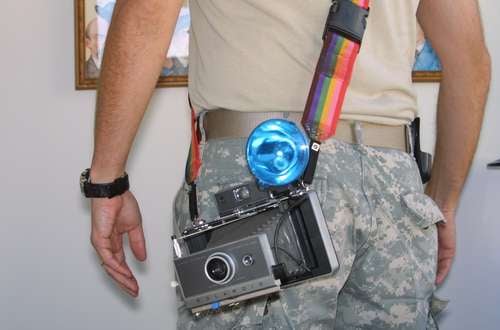 What does a rainbow mean to you? An interesting atmospheric phenomena…. gay pride… the 42nd Infantry Division? To me a rainbow screams, “Polaroid Corporation!”. Even when Polaroid was actually making cameras, the camera straps were disappointingly plain vanilla. Polaroid missed a critical branding opportunity! In this tutorial, I’ll attempt to make a new camera strap for my Polaroid 100 camera by recycling rainbow colored luggage belts.

Step 1: Things You Will Need 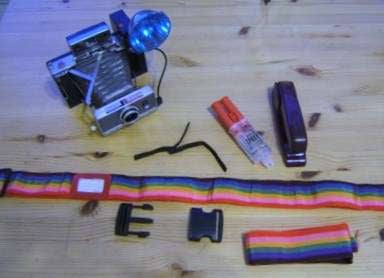 Do you remember those garish belts that were designed to keep your American Tourister suitcase from succumbing to internal pressure and showering the airport with deadly underwear shrapnel? For what ever reason, I ended up with several of the rainbow variety of them. I never used them since I’m a duffel bag kind of guy so they looked pretty good.

Good enough to replace the hopelessly dry-rotted leather strap that was the original camera neck strap on my Polaroid 100 camera. If you would like to do the same, you will need:

I used two belts so I could make a quick disconnect. One belt will remain unaltered and the other will be cut up and configured to interface with the lugs on the camera.

I used a “No-Sew” method throughout this tutorial. It is basically steel reinforced epoxy and should be plenty strong for a camera strap. I have nothing against sewing… I’m just not very good at it.

Take one belt and cut off the hardware. 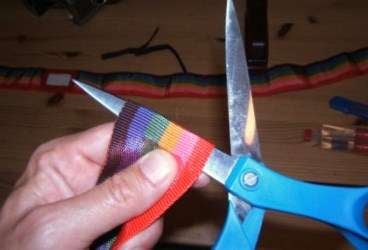 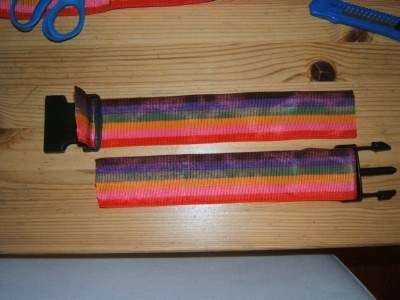 Flame the edge of all pieces to prevent fraying. 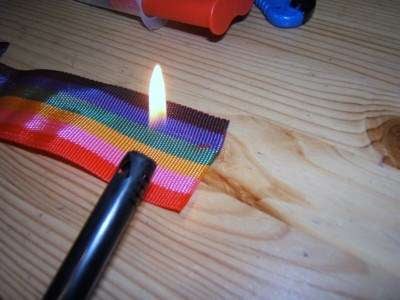 Thread the belt material through the plastic hardware. Mix up a small amount of epoxy and apply to the belt. 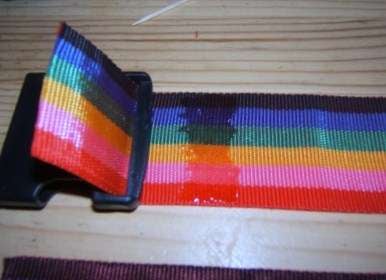 Fold the belt material over and make a loop and secure to the still wet epoxy. While the epoxy is still fluid, use a stapler and staple through the material to reinforce the bond. 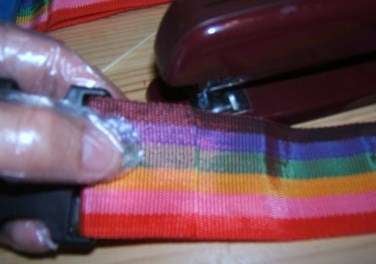 Clean any epoxy that oozed out during the stapling process off the stapler with the alcohol (you can also use vinegar, mineral spirits, etc.). Repeat with the other tail. 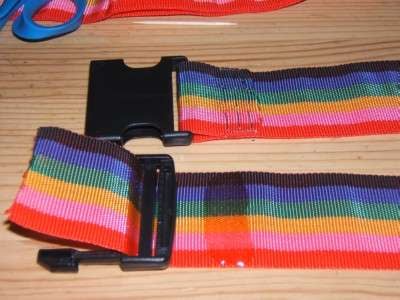 Let the epoxy cure (I used the 5 minute stuff, so it did not take too long).

After the hardware is attached and the glue has cured, you need to pay some attention to the other side of the tail… the part that interfaces with the camera.

Take the thin nylon strap and place it in the middle of the belt. Fold the belt so there is a rough triangle at the end of the strap. 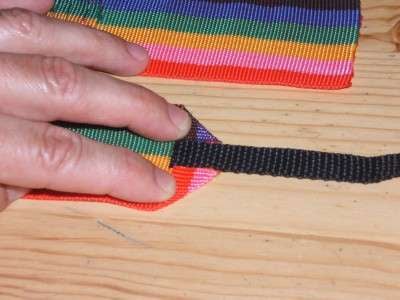 Mix the epoxy and glue the nylon strap and folded belt material together. Staple through the material while the epoxy is still fluid. 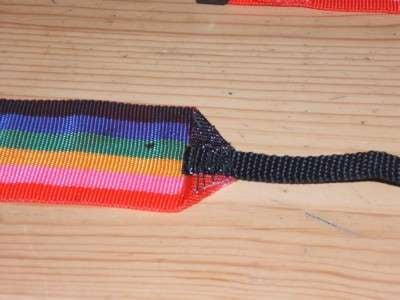 Clean up any epoxy that oozed out. Repeat with other tail. 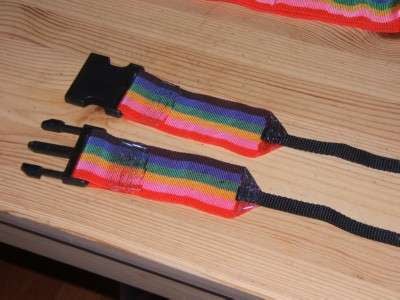 The epoxy and staple method of joining the material is very strong, but not that pretty. Also, the staples can catch on things if left alone. If you did a nice job of stapling, you can just flow some epoxy over the staples to seal them. I used a little cleaner method that hides the staples. This will make the bond even stronger, but it will be stiff.

Cut some belt material long enough to cover the stapled area. Remember to flame the edges. 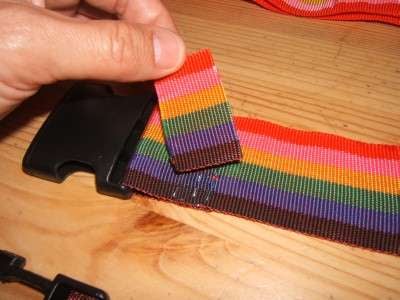 Mix epoxy and apply to the area with the staples and apply the hiding patch over the staples. Do the same to the opposite side. Clamp with some clips and allow the epoxy to cure. 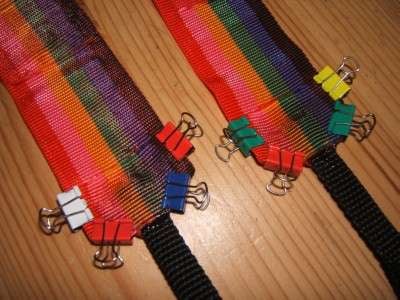 Repeat for all stapled areas.

If you had the appropriate buckles, you could attach the straps to the camera in the traditional way. However, I did not, so I used a less conventional method.

Fold the nylon straps to make a loop. With a soldering iron, melt a hole through the center of the doubled over nylon strap large enough to insert your bolt. 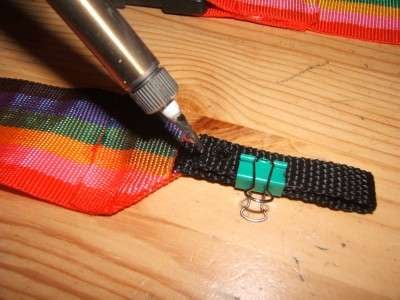 Repeat with other tail. Thread the nylon strap through the camera strap lugs. 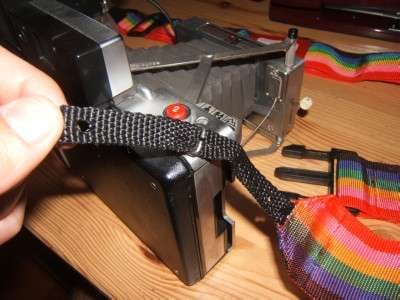 Secure the straps with the nut and bolt and repeat with other tail. 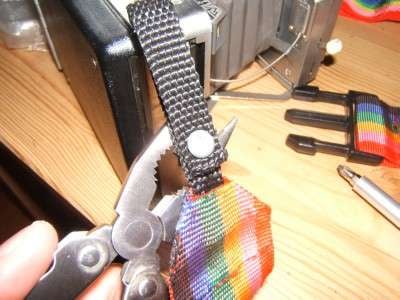 Time to put it all together. Use the male and female connectors to attach your camera to the unaltered strap. 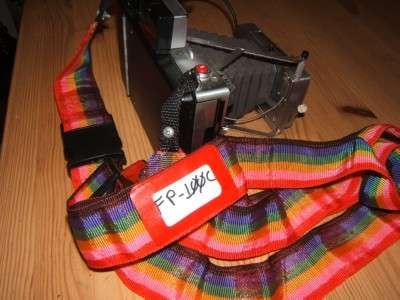 You can adjust the length of the strap with the adjustments on the unaltered belt. Mine turned out pretty long so I’ll just cut off some of the unaltered belt sometime in the future… for now it is my low rider. 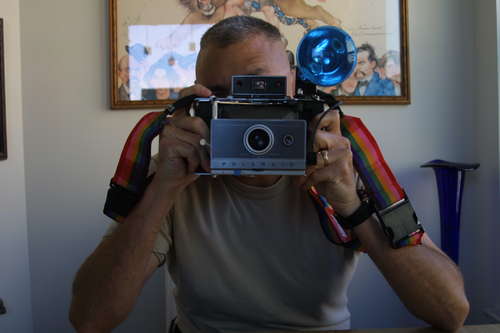 About the author: Daniel Goodale-Porter is based in the DC Metro area, works for the United States Army, and enjoys photography in all its forms. He especially enjoys hacking and using old cameras. You can find other tutorials by him on Instructables here.

Glass Door Knob Provides a Fisheye View of the Other Side